Scarcely a single person in the whole town was left unconcerned about the great things of the eternal world.

PART OF THE SERIES:

Heroes of the Faith

A sermon series looking at great men and women of Christianity. The series includes:

John Huss
(1369 - 1415), Czech church reformer
"Blessed also be the Lord, the one living head of the church, who preserves her so effectually in unity that, even now, while there are three so-called papal heads, she remains the one spouse of the Lord Jesus Christ!"
Manuela on 23rd July


Jonathan Edwards
(1703 - 1758), American revivalist preacher and theologian
"Scarcely a single person in the whole town was left unconcerned about the great things of the eternal world."
Tim on 30th July


Dietrich Bonhoeffer
(1905 - 1945), German pastor and anti-Nazi dissident
"The Christian life is less about cautiously avoiding sin than about courageously and actively doing Gods will"
Andy on 6th August


Charles Spurgeon
(1834 - 1892), known as the Prince of Preachers
"God is too good to be unkind and He is too wise to be mistaken. And when we cannot trace His hand, we must trust His heart."
Bode on 13th August


Martin Luther
(1483 - 1546), seminal figure in the Protestant Reformation
"From the beginning of my Reformation I have asked God to send me neither dreams, nor visions, nor angels, but to give me the right understanding of His Word, the Holy Scriptures; for as long as I have God's Word, I know that I am walking in His way and that I shall not fall into any error or delusion."
Duncan on 20th August


Helen Roseveare
(1925 - 2016), Christian Missionary
"If you think you have come to the mission field because you are a little better than others, or as the cream of your church, or because of your medical degree, or for the service you can render the African church, or even for the souls you may see saved, you will fail. Remember, the Lord has only one purpose ultimately for each one of us, to make us more like Jesus. He is interested in your relationship with Himself. Let Him take you and mould you as He will; all the rest will take its rightful place."
Jill on 27th August


Sermons will appear below when they become available. 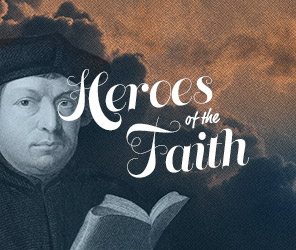